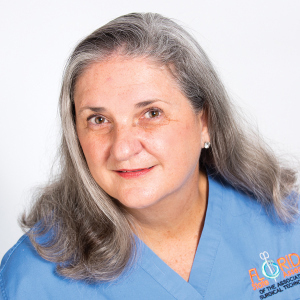 From Wall Street to Surgical Suite
The lure of Wall Street held strong for 19 years, during which Sharon Peretz worked as a financial analyst on the floor of the New York Stock Exchange. She juggled time at home raising three children, then her husband’s relocations and other finance jobs, until finally, after her divorce, she made a promise to herself. “I decided that for the rest of my life, I was only going to do things that I was passionate about.” She graduated from Palm Beach State’s Surgical Technology program in May 2014, passed her certification exam, and now works at Delray Medical Center, assisting in emergency surgeries.

Peretz stayed true to her promise and followed some unusual paths, including three years as the house mother for the Beta Theta Pi fraternity at the University of Florida, her alma mater. A great gig for a diehard Gators fan, Peretz, 55, also decided to take classes and considered a career in counseling, given that she enjoyed a comparable role as “Mom Shar” to hundreds of young men. Instead she discovered surgical technology in an online search. “It was like a cherry bomb went off. I’ve always been interested in the sciences. I graduated high school at 16 in a very rural area of Mississippi. My parents wanted me to be a bookkeeper . . . which is the reason I got into the whole Wall Street thing.”

Peretz is thrilled with her new career. “I assisted in a craniotomy this morning with two surgeons – the patient had subdural hematomas on both sides of the brain – and this afternoon we had an emergency ectopic pregnancy. I’m overwhelmed. I am intimidated. I’m excited. I am learning so much. I made a Facebook post after one of my first days. I said to everyone I know, ‘How many things did you do today that you did for the very first time?’ I lost count after 9 o’clock in the morning.”

This profile is an excerpt from the article “Heart’s Desire: Career Transformations at Palm Beach State” in PBSC’s Contact magazine. Read the full article 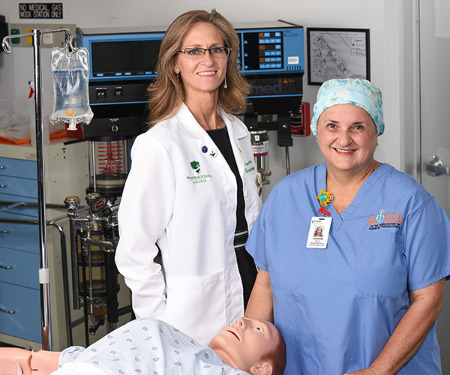