*All dates and performances subject to change.

Come and see our local youth shine as the Missoula Children’s Theatre presents “Jack and the Beanstalk”, an original adaptation of the classic children’s story. What happens when a young boy plants Wonder Beans in his own backyard? For Jack, it is the beginning of a great adventure. With a little help from P.T. Wonder and a Giant, Jack learns a valuable lesson about true happiness. This musical production also features a host of other characters, including the Elegant Harp, Jill, Mother, Milky White, the Farmers, the Merchants, the Circus Performers, and the Wonder Beans.

Following the 11:00 am performance, refreshments and lots of fun activities sponsored by the Bank of Belle Glade and the Glades Area Branches of the Palm Beach County Library System will be available in the lobby. Parents, bring your cameras for this event, included in the price of admission.

“Let’s go see a poetry show.” That is a sentence rarely proclaimed and usually responded to with cringes and excuses. The Mayhem Poets are on a mission to change that. Having been dubbed “an amazing ride” by the New York Times, this mind-boggling performance has been described as “The Simpsons meets Malcolm X at a Notorious B.I.G. concert”. These theatre-trained, comedically gifted, lyrical virtuosos seamlessly blend raw elements of hip hop, theatre, improv and stand-up comedy to tell gut wrenching truths that leave audiences forever changed.

With what has become an annual event, the Holiday Festival will include the official tree-lighting for the 14th Annual Festival of Trees. There will be wonderful music by talented local performers and a visit from Santa (bring your cameras!) to remind you that Christmas is coming soon.  Beautiful Christmas trees decorated by local citizens, organizations, groups and businesses and will fill the Grand Hall and you can support the Dolly Hand Cultural Arts Center’s fundraising efforts by bidding on your favorite themed tree in the silent auction. The auction will close after the performance of The Nutcracker on December 5th!  Be the highest bidder and take your tree home for the holidays! 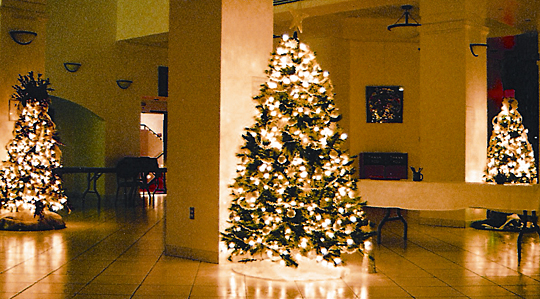 As one of the most highly acclaimed performers of our time with five Grammy® awards, four Billboard Music Awards, three platinum records, five gold records, and eleven million units sold, Sandi Patty is simply known as The Voice. She is the most awarded female vocalist in contemporary Christian music history, with 40 Dove Awards and she was inducted into the Gospel Music Hall of Fame in 2004 and as an Indiana Living Legend in 2007. Sandi was introduced to the world with her rendition of The Star-Spangled Banner during the rededication of the Statue of Liberty in 1986. Virtually overnight she became one of the country’s best-loved performers. Her version of the national anthem has become synonymous with patriotic celebration, including performances at “A Capitol Fourth” with the National Symphony, the Indianapolis 500, the Dedication of Camp David Chapel, and ABC’s Fourth of July Special.

Steven Malcolm is a Christian Hip-Hop recording artist from Grand Rapids, Michigan with Jamaican roots. His music, which has been streamed over 11.5 million times, has been featured on Spotify’s New Music Friday, been used by the NBA on ESPN, and on VH1’s “Black Ink Crew.” Malcolm, who is known for pushing visual and sonic boundaries with his cinematographic eye and multi-cultural musical background, has been nominated for 3 Dove Awards and performed for over 1 million people. Steven's upcoming release - The Second City - shows his diverse artistry as he combines multiple genres from hip-hop, reggae, and worship.

The Isaacs are a multi-award-winning family group who began singing 35 years ago. Playing their own acoustic instruments and joined by other band members, The Isaacs have a unique style that blends tight family harmony with contemporary acoustic instrumentation that appeals to a variety of audiences.  Their musical style has been influenced by many genres of music including bluegrass, rhythm and blues, folk, country, contemporary, acoustic and southern gospel. The Isaacs have won over 7 Doves in various categories and have had several Grammy nominations in their career. They perform frequently at the Grand Ole Opry and are active members on the Gaither Homecoming Videos and Concert Series.

Born in South Florida to a Jamaican father and Barbadian mother, Malcolm, 23, and his 20-year old brother Umoja learned to play violin through South Florida’s public-school system and attended Dillard High School for the Performing Arts. Together, these brothers are Sons of Mystro. They use their violins to interpret reggae classics, American pop songs and their own creations accompanied by beats, and sometimes a DJ & guitarist. They are winners of the Emerging Artist under 21yrs Old award at IRAWMA (International Reggae and World Music Awards). Their debut recording, “Reggae Strings” is available now wherever music is streamed or sold Mentored by Black Violin, these artists’ stars are on the rise.

Jekalyn Carr is a GRAMMY® Award nominee and GMA Dove Award-winning independent recording artist. She is a profound speaker, entrepreneur, actress, and author. She has spent half a decade on top of the charts, as a top selling independent recording artist. Jekalyn Carr has earned eight career Billboard #1’s before the age of 21, which includes her hit singles, “You’re Bigger” and “You Will Win”. At the age of 15 years old, she released the poignant and powerful Billboard Top 5 single, “Greater Is Coming”.