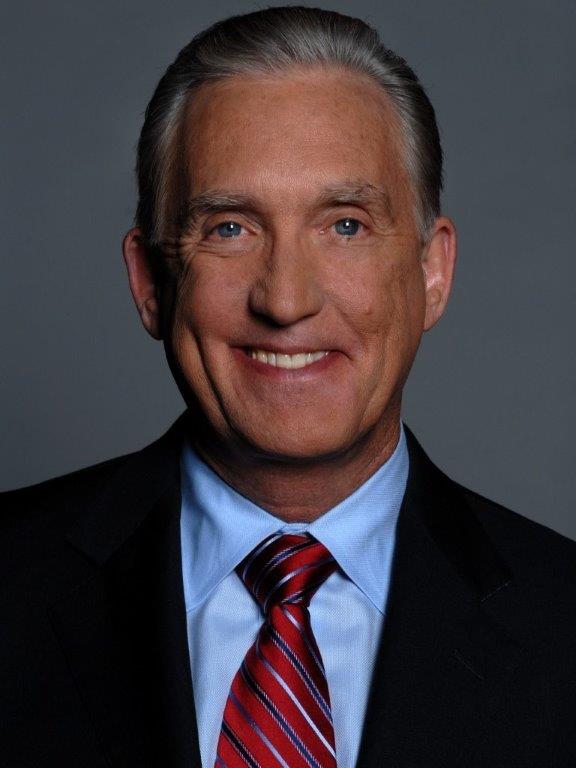 Don Browne is the former president of Telemundo Communications Group, Inc. He oversaw all functions of the Telemundo television network and its 16 owned-and-operated stations.

Prior to joining Telemundo Network, Browne served as president and general manager of WTVJ, NBCUniversal’s owned-and-operated station in Miami and was a longtime advocate of expanding into the Spanish-language television market to better serve the Hispanic community. Browne was a key member of the NBCUniversal team involved in the acquisition of the Telemundo network.

Before joining WTVJ, Browne was executive vice president of NBC News in New York from 1991 through 1993. From 1989 to 1991, Browne served as NBC News’ executive news director. While he was the executive in charge of the "Today" show, he orchestrated its resurgence as well as the launching of the weekend edition of the “Today” show. He was also involved in the creation and the airing of “Dateline,” the first successful prime-time news magazine in NBC’s history.  From 1979 to 1989, as NBCU’s Miami bureau chief, Browne directed news coverage of Central and South America. Before joining NBCU, Browne worked for CBS News for over a decade.

Throughout his career and even in retirement, Browne maintains a national reputation for his recruitment and career development of women and minorities. He is co-founder and board member of the "Women of Tomorrow Mentor and Scholarship Program" for at-risk high school girls. He is the recipient of the 2006 Florida Governor's Points of Light Award for exemplary service to his community and the 2004 prestigious Ida B. Wells Award for his commitment to promoting diversity in the workplace. He was a charter member of the NBCUniversal News Taskforce on Women and Minorities and served as a member of NBCU’s Taskforce on Diversity.

Browne has also remained active in giving back to colleges and universities. He is an advisor to the University of South Carolina School of Journalism. In 2020, Browne addressed the Lead to Influence cohort of upper-level college administrators at Palm Beach State College and with his own success, challenged them to commit to intentional inclusivity in their leadership. 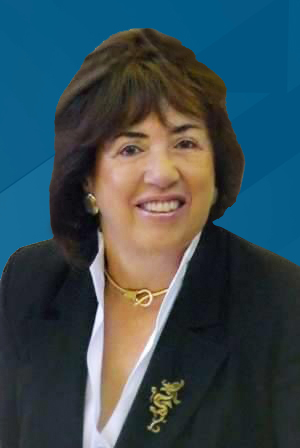 Palm Beach State College alumna Julie Kime has dedicated herself to those in need, giving back to local organizations, supporting equity, diversity and at-risk youth, as well as providing resources and access to education.

Starting her journey as a student, she has now come full circle, returning to her PBSC alma mater as a scholarship donor and serving as a board member for the PBSC Foundation. As a mentor, philanthropist and scholarship donor, she has established the Julie Kime Hispanic Women Scholarship at Palm Beach State. Her philanthropy, community spirit and experiences have been inspiring the Palm Beach County community for over 30 years.

She knows firsthand the meaning of leveling the playing field through education and broadening opportunity. For her contributions to the Boys and Girls Clubs of Palm Beach County, she was nominated to the prestigious Jeremiah Milbank Society, an elite group dedicated to serving the local Boys and Girls Clubs. Since 1987, she has served on their Corporate Board of Trustees. When the new club in Wellington opened eight years ago, a generous donation from Kime and her husband, John, supported its construction. Their name is proudly displayed at the Welcome Center.

Of Cuban background, Kime was the first Hispanic female owner and operator of an Allstate agency in Palm Beach County, and she ran the business for 33 years before retiring in 2012. In 1982, she joined with a handful of business leaders in Wellington to become a founder of the Palms West Chamber of Commerce (now Central Chamber) and was a founding member of the Chamber Trustee Program. Other recognitions include:

Relationships and involvement are central to Kime. She rolls up her sleeves to make sure children and college students have memorable experiences and resources to be productive adults. She has leveraged her business and personal relationships to open numerous doors that broaden the horizons of the organizations she holds dear. 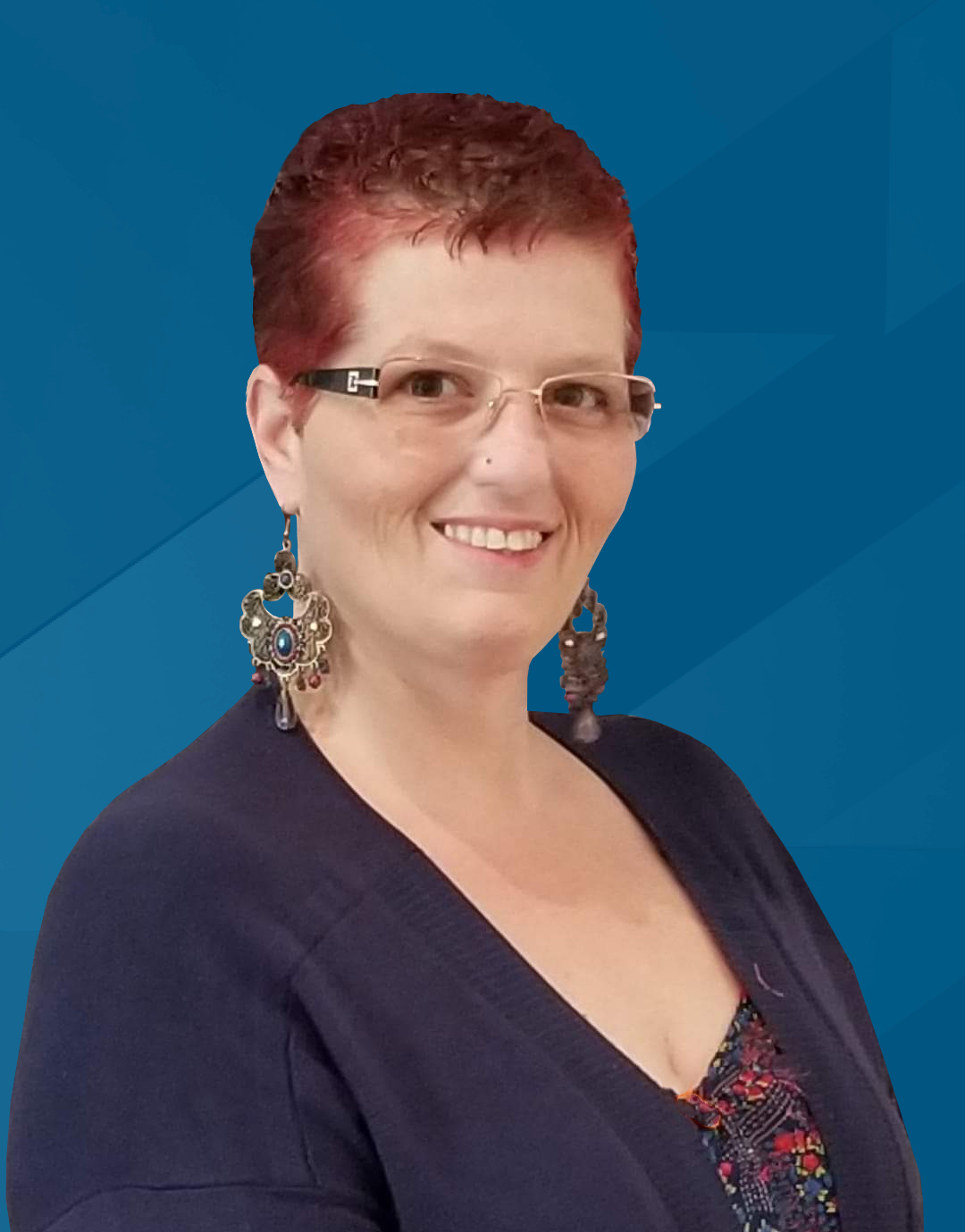 Dawn Marchese Rosado has been serving for five years with the United Way of Palm Beach County’s Volunteer Income Tax Assistance program. VITA provides free tax preparation services for low- to moderate-income households, and she helps prepare taxes at one of the busiest sites.

Rosado says she loves giving back to the community and helping people understand things. Through the years, she has logged over 860 volunteer hours at the United Way. Her colleagues describe her as one of the most reliable volunteers. She never cancels and always shows up on time. Each year, when volunteers must recertify as an IRS tax preparer, she also is one of the first to complete her certification and provide documentation to the United Way team.

She also has volunteered for the last three years at the United Way’s Tax-a-Thon event. During the pandemic, she began helping the Palm Beach County Community Services Department with reviewing residents’ applications for rent and utility assistance through CARES Act Funding.

Rosado volunteers her time while also juggling her part-time job as a cashier and going to school part time. A Brooklyn native and married mother of two adult sons, she decided to enroll at PBSC in 2020 after her youngest child graduated from high school. She had not been in school in over 26 years after dropping out of Long Island University to take care of family matters. She says she is pleased to be back in school to earn an education. She is pursuing an Associate in Arts degree and expects to graduate in summer 2022. While she is not yet sure of her career path, she knows that volunteering will remain central in her life. “I just want to make sure I continue to volunteer and make sure the people who I help get a fair and equal opportunity like everybody else.” 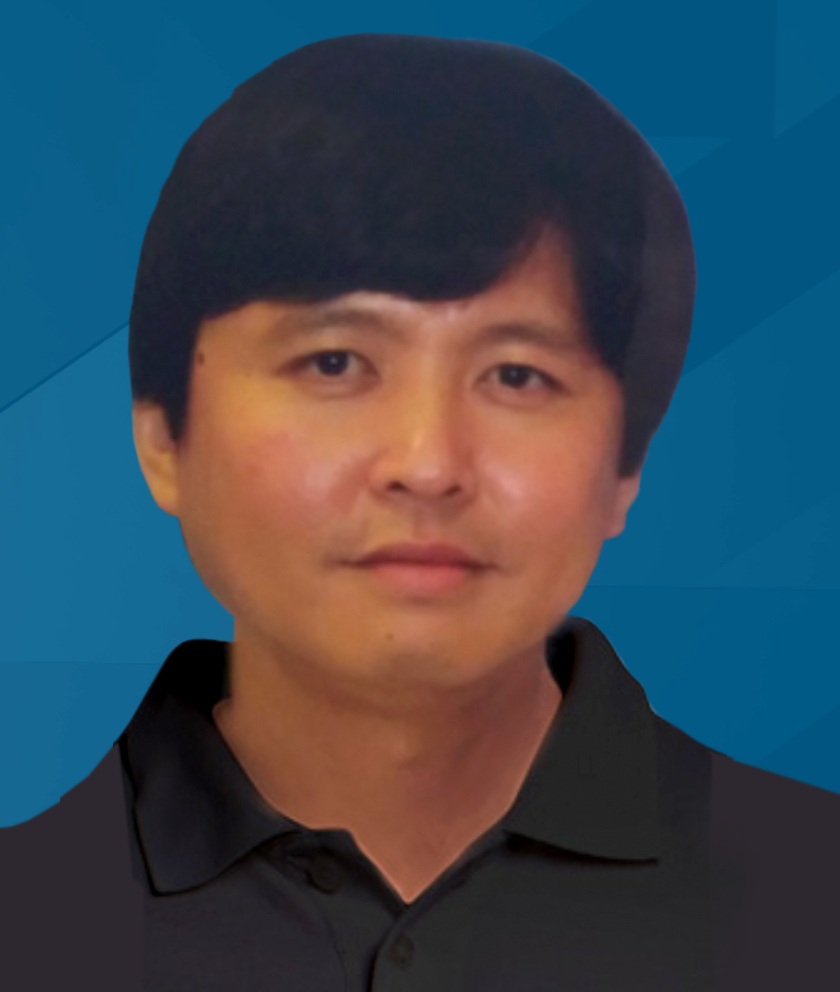 Dr. Jang-Young Bang, a physics professor at Palm Beach State College, has turned his passion for his field into opportunities to do outreach on campus and in the community to provide support for students interested in STEM and to pique the curiosity of others.

He joined the PBSC faculty in fall 2014, and he quickly got involved. In January 2017, he officially launched a new Physics Club to create and sustain a welcoming community for physics and engineering students to find peer tutoring, mentoring and career direction.

The club, for which he still serves as advisor, organized a Physics Fest on campus at which students from various physics courses performed experiments to showcase their knowledge and to drive interest. It also participated in and contributed to the success of Palm Beach State STEAM Fests held in 2018 and 2019. Before the pandemic, club members visited elementary schools in economically challenged areas and underrepresented students. Since then, they have organized various virtual events. Bang says to increase diversity in physics and STEM long term, it is important to reach students at younger ages and from diverse backgrounds and communities.

A native of South Korea, he has taught both calculus- and algebra-based physics, conceptual physics, earth science, and some math courses. He served as Physical Science and Chemistry department chair from fall 2016 to spring 2020. As a member of eLearning and Instructional Technology Committee, he organized the Community of Practice for Lake Worth faculty. As a member of the College Affordability Task Force, he led the Open Educational Resources Promotion Subcommittee. Bang was a 2020 recipient of PBSC’s Stewart Award for teaching excellence. 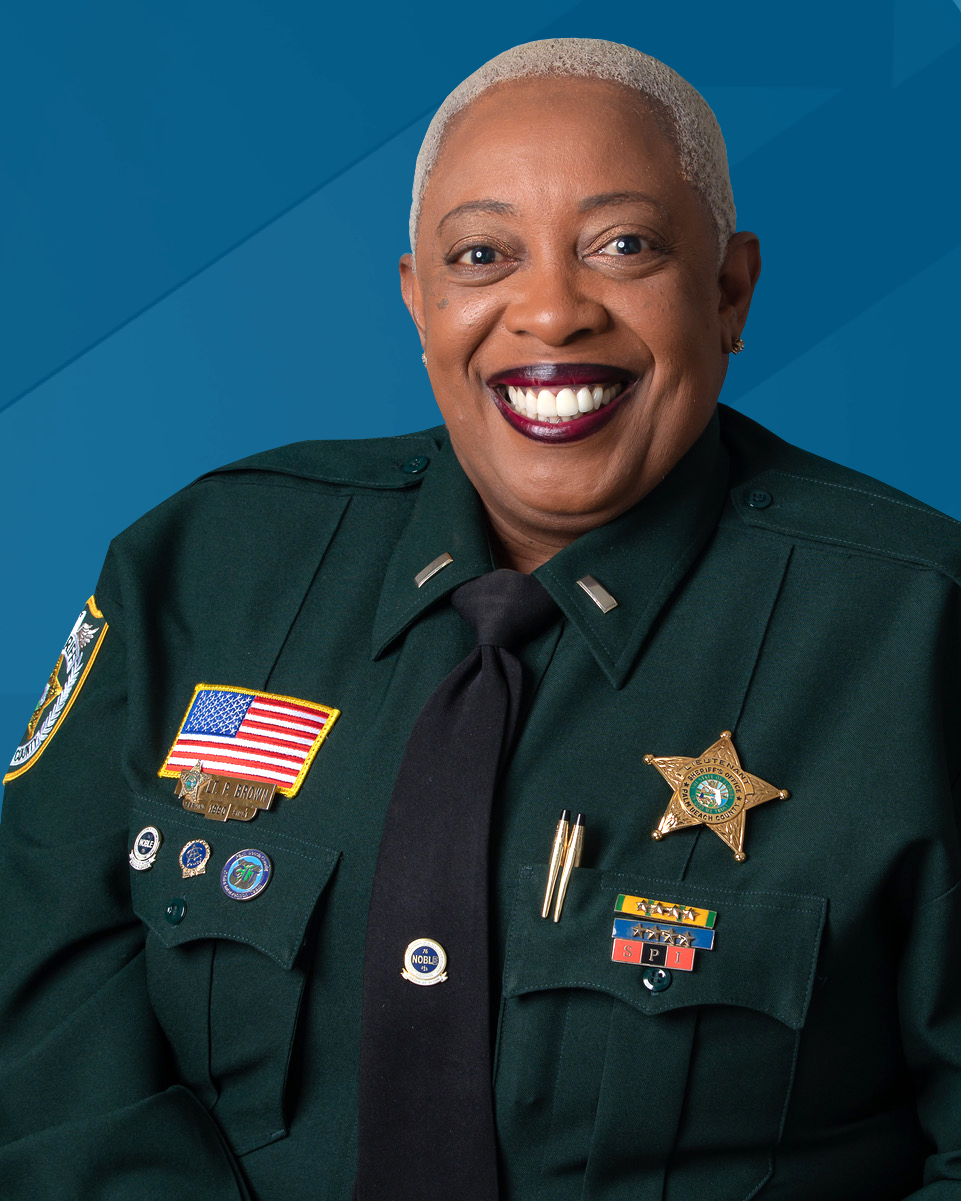 Patricia R. Brown served the Palm Beach County Sheriff’s Office in various capacities for over 31 years before retiring this past November as a lieutenant and executive officer of the West Detention Center. However, her service to the community extends beyond her law enforcement career.

Since 2012, she has been a mentor for Take Stock in Children in Palm Beach County, and she works with other organizations that focus on youth support. She is on the board of Freeprenuers, a nonprofit that provides workshops on etiquette and other topics for African American girls ages 9-17, and she recently completed a four-year term on the board of the Glades Initiative.

She is currently president of the South Florida Chapter of the National Organization of Black Law Enforcement Executives, and she previously served for three years as vice president for Sector 3, which covers Palm Beach County.

Brown is a graduate of Leadership Palm Beach County Class of 2013 and co-chaired Public Safety Day from 2014 to 2021. She also is a graduate of the University of Louisville’s Southern Police Institute’s 116th Administrative Officer’s Course and Police Executive Graduate Program, where she received the B. Edward Campbell Service Award for “meritorious service.” Among other honors, she received a Leadership Excellence Award from Leadership Palm Beach County in 2019 and the Southeast Florida Girls Scouts Emerald Award and Bethesda Hospital Foundation Women of Grace award in 2020. Take Stock in Children honored her with Mentor of the Year awards in 2016 and 2020.

A Palm Beach County native, she holds a master’s degree in public administration and bachelor’s degree in liberal arts from Barry University, as well as an associate degree in marketing management from South University. She recently completed an Associate in Science degree in Funeral Services from Miami Dade College and plans to become a licensed funeral director and embalmer in 2022.

Brown believes that faith, character, integrity, ethical decision making and education are the keys that will open many doors.

In the past year, the Literacy Coalition served 46,867 adults, children, youth and families through literacy programs. Literacy AmeriCorps members provided 56,574 hours of service, which included teaching, tutoring and mentoring 234 adults, 1,662 teens and 212 children, and the Literacy Coalition distributed 102,536 books to children, families and organizations. The Literacy Coalition is working to address the fact that 22.2% of adults ages 16 and older lack basic literacy skills and can’t fill out a job application or read a bus schedule and that 46% of third-grade students read below grade level, begin to fall behind in every subject, not just language arts, and are at greater risk of dropping out of school.

The Literacy Coalition serves preschool children who live in homes that don’t contain a single book; children who feel alienated and angry because they struggle to read as well as their friends; and families who live in poverty because the parents don’t have the literacy skills to qualify for a job with a sustaining wage. The Literacy Coalition is highly regarded and has earned 12 consecutive 4-out-of-4-star ratings from Charity Navigator. For more information, visit LiteracyPBC.org.