Human trafficking is a form of modern-day slavery and the fastest growing criminal industry in the world, recently rising to the second most common criminal activity behind the illegal drug trade.

One way to combat human trafficking is to raise public awareness.

Title IX in a Virtual World

Social Distancing will more than likely keep you from catching COVID-19, however you may see things like sexual harassment, stalking and relationship issues increase.

The Title IX office is available to assist you virtually with any questions you may have about these issues or other sexual misconduct concerns.

Forced labor may result when employers exploit workers who are vulnerable due to high rates of unemployment, poverty, crime, discrimination, corruption, political conflict, citizenship status or cultural acceptance of the practice.

According to Florida Statute, human trafficking affects all sectors of our community and victims can be found in plain sight if we learn to identify the signs and take the time to look. Some traffickers keep their victims under lock and key. However, the most frequently used practices are less obvious techniques that include: isolating victims from the public and family members, confiscating passports, visas, or other identification documents, using or threatening to use violence toward victims or their families, prohibiting them from seeing their children, telling victims that they will be imprisoned or deported for immigration violations if they contact authorities, and controlling the victims' funds by holding their money for "safekeeping."

How Do I Report a Suspected Incidence of Human Trafficking?

In cases of immediate emergencies, it is best to call your local police department or emergency access number.
For more information, please contact: 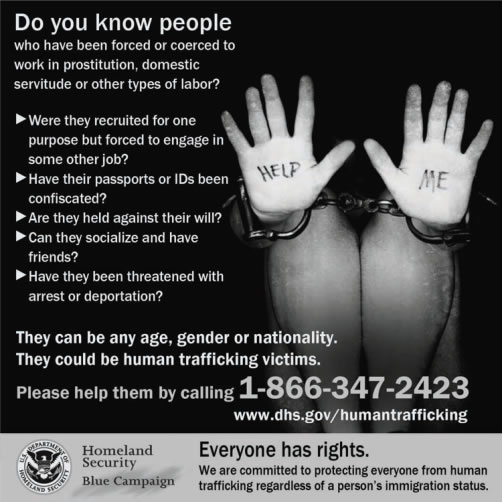 Florida Dept. of Children and Families

Lawsuit: Your Candy Bar Was Made By Child Slaves

Why Her? What You Need to Know About How Pimps Choose