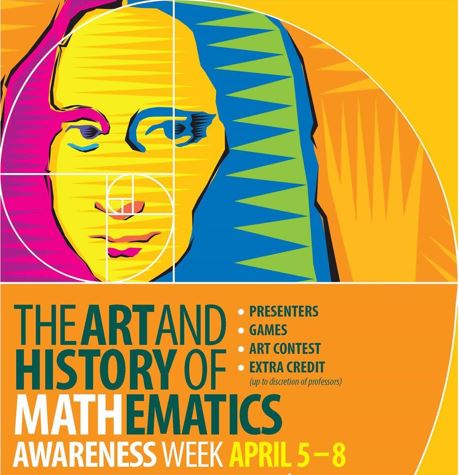 Mark McKay is a founding member of the Ophthalmic Medical Technologist program at Palm Beach State.  He loves teaching and lecturers nationally about eye care. He is a board-certified optician.

Dr. Speights’ teaching experience spans over 20 years. She received a Master’s in Mathematics Education in 2006 at Nova Southeastern University and a Doctorate in Leadership Education at Valdosta State University in 2018.

In 2013, Dr. Speights received a special recognition from the Vice President of Academic Affairs for her role in the redesign of the Developmental Mathematics courses which lead to improvements in student success and retention.  Professor Speights joined PBSC in 2015 as a Professor of Mathematics.   Her research has focused on “The Effects of Developmental Math Courses on Student Success Outcomes at Community Colleges.”   Professor Speights has always been committed to developing and implementing learning strategies which promote “student success and retention.”

In her spare time, Professor Speights loves to spend time at the beach, traveling or hanging out with family and friends.

Mario F. Triola a Professor Emeritus of Mathematics at Dutchess Community College, where he has taught statistics for over 30 years. He is the author of Elementary Statistics -- the #1 best-selling statistics text in the market for the last 25 years. Marty is a firm believer that “real data brings statistics to life,” and that is the foundation on which he writes his texts. Marty also designed the original Statdisk statistical software, which is incorporated into his texts along with other software packages.

Marty’s interest in applying statistics to real-world situations comes from his own work experiences. Marty’s consulting work includes the design of casino slot machines and fishing rods. He has worked with attorneys in determining probabilities in paternity lawsuits, analyzing data in medical malpractice lawsuits, identifying salary inequities based on gender, and analyzing disputed election results. He has also used statistical methods in analyzing medical school surveys, in analyzing survey results for the New York City Transit Authority, and analyzing COVID-19 virus data for government officials. Marty has testified as an expert witness in the New York State Supreme Court. The Text and Academic Authors Association has awarded Marty a “Texty” for Excellence for his work on Elementary Statistics.

Jesse Rogers has been a Learning Specialist at PBSC since 2006.

Since the pandemic he has written around 75 Medium articles, become a REALTOR, a podcaster, and a cryptocurrency investor. He’s interested in developing an entrepreneurship club so connect with him at rogersjj@palmbeachstate.edu if interested.

Read his Medium posts at https://jessejrogers.medium.com/

Professor Trupin received his Ph.D. in Physics from the University of Colorado.

Alisa J. Stephens-Shields, Ph.D., is an Assistant Professor of Biostatistics at the University of Pennsylvania Perelman School of Medicine.  Her research focuses on extensions and innovative applications of causal inference to enhance the design and analysis of clinical trials.

She is a recipient of the inaugural Committee of Presidents of Statistical Societies Leadership Academy award and has held elected positions in the American Statistical Association Section on Statistics in Epidemiology and the Eastern North American Region of the International Biometrics Society. Dr. Stephens-Shields serves as associate editor for the journals Biostatistics and Pharmacoepidemiology and Drug Safety.

She is a proud native of Teaneck, New Jersey, and holds Ph.D. and A.M. degrees in biostatistics from Harvard University and a B.S. in mathematics with minor in Spanish from the University of Maryland, College Park. She is a member of Phi Beta Kappa and Omicron Delta Kappa national honor societies.

Dennis Runde is in his 31st year of teaching mathematics at State College of Florida in Bradenton. He earned his BS and MS in Mathematics from the Universities of Wisconsin at Platteville and Milwaukee, respectively and his PhD in Mathematics Education from the University of South Florida. He is lead author on a Liberal Arts Mathematics textbook and on a series of Algebra for College Students textbooks. Dennis and his wife, Kristin, are the proud parents of three adult sons.

Lynn Gamwell is a lecturer in the history of art, science, and mathematics at the School of Visual Arts in New York. She is the author of Mathematics and Art: A Cultural History (Princeton, 2018) and Exploding the Invisible: Art, Science, and Spiritual (Princeton, 2020).

David has worked almost 20 years in college career development.  Mr. Jenks has been with PBSC since Fall 2017 and has also worked at the FAU and UCF Career Centers.  His previous career was sales and marketing in the finance and travel industries.

Dr. Suarez Worked at Pratt & Whitney for 17 years, and taught while working as an adjunct. Two and a half years ago, she accepted the position of Engineering Technology Department Chair, and since then expanded the ET program to all four campuses.

I went to North Dakota State University for my undergraduate degree, where I majored in math & economics. I attended graduate school right after because I enjoyed the upper-level math classes and wanted to learn more.  I earned my PhD in computational mathematics from Clemson University in 2019. I am now working for NextEra Energy as a Data Scientist. I’ve had a lot of fun in this role because it’s allowed me to apply my mathematical knowledge to completely different situations and help build data-driven solutions for engineers at NextEra.

Craig has a BS in Biology, and a MS in Coastal Zone Management with an emphasis on marine biology. With more than 35 years of experience, he provides clients with coastal zone resource planning, permitting, and monitoring support. A major part of his responsibilities include working on comprehensive characterization, monitoring, and mitigation program development with an emphasis on natural hardbottom, artificial reefs, and living shorelines.

During his career, Craig has worked on projects that require a comprehensive understanding of State and Federal coastal resource permitting and National Environmental Policy Act compliance. He has served as principal scientist on numerous field investigations throughout the Gulf of Mexico and East Coast of the United States. Craig’s recent project experience includes implementation of a comprehensive water quality monitoring program at Port Everglades and support of a marine resource monitoring program in the United Arab Emirates.

Ms. Schmitt is a Managing Director and Investment Specialist at Intech. She has been with Intech for 18 years. Ms. Schmitt is responsible for providing investment solutions to current and prospective intermediary relationships.

Ms. Schmitt earned her MBA in International Business from Keller Graduate School of Business Administration. She earned her BS in Computer Science from Fordham University.

Ms. Schmitt worked in New York City as a web developer for Kiwibox.com and as a teacher’s assistant in the Computer Science Department at Fordham University while earning her undergraduate degree. Ms. Schmitt holds FINRA Series 7 and 63 licenses.

Professor Katyal has been teaching Mathematics at PBSC since 2010. Professor Katyal was selected as a fellow in a Scholarship of Teaching and Learning which was piloted by the American Mathematical Association of Two-Year Colleges. Professor Katyal teaches his courses using an inquiry-based learning format, choosing not to lecture to students but instead engage them in solving math problems on their own at the onset of class sessions.

When Professor Pick was young, he viewed math as a collection of cute tricks. “Often, I did not pay attention to why I was able to implement these cute tricks. I just enjoyed playing with cute math tricks. While attending university I learned about the deep theoretical concepts that explained why I was allowed to implement the math tricks of my youth. The proofs of these theoretical concepts contained many wonderful, deep, and ingenious tricks that I added to my “bag of cute math tricks”. After university I worked in industry as a programmer and wrote software for radar systems and hardware simulations My math background came in handy because the applications that I wrote programs for required a deep understanding of math (calculus, linear algebra, statistics, and Boolean logic). For the last 8 years I have used my experiences with cute math tricks, theoretical math, and industrial applications to make math more meaningful and enjoyable for Palm Beach State College students both in the classroom and during my Math Awareness Week presentations.”

Robert “BOB” Anstett is the Coordinator for Digital Initiatives for Broward County Libraries. Bob is in charge of the Creation Station at Main Library in Fort Lauderdale as well as Creation Station Business and other creative spaces around the County. Bob likes to say that he “lives in the future” where he gets to work with 3D printing, creative design, hands on maker projects and robotics. He is currently organizing and running a robotics track for the public to learn coding and building robots, as well as a Virtual Reality (VR) track with an Oculus Rift & HTC Vive along with other VR & Augmented Reality (AR) gear such as a Microsoft HoloLens and Magic Leap available for the public to try out and develop on. Bob works at building connections with the local community and the library along with fostering cooperation between libraries around the State of Florida and beyond.

I am currently a student at Palm Beach State College and will be transferring to FAU in the Summer to pursue a degree in Mathematics. Prior to studying at PBSC I was a linguist in the U.S. Air Force. When I am not doing my math homework I enjoy cooking and baking as well as hiking and fishing.

Participants are allowed to submit one piece of art in each of the two categories.

Eligibility to enter the Art Competition

Participant must be currently enrolled at Palm Beach State College.

Participant must be currently enrolled in at least one course at Palm Beach State College during the Spring 2021 Semester.

Guidelines for participating in problem of the day/week

Note: All competition are open to currently enrolled PBSC Students

Raffle winners for Problem of the Week: $50 + Graphing Calculator

Raffle winners for Thursday’s Problem of the Day: $50

Raffle winners for Wednesday’s Problem of the Day: $50

Raffle winners for Tuesday’s Problem of the Day: $50

Raffle winners for Monday’s Problem of the Day: $50 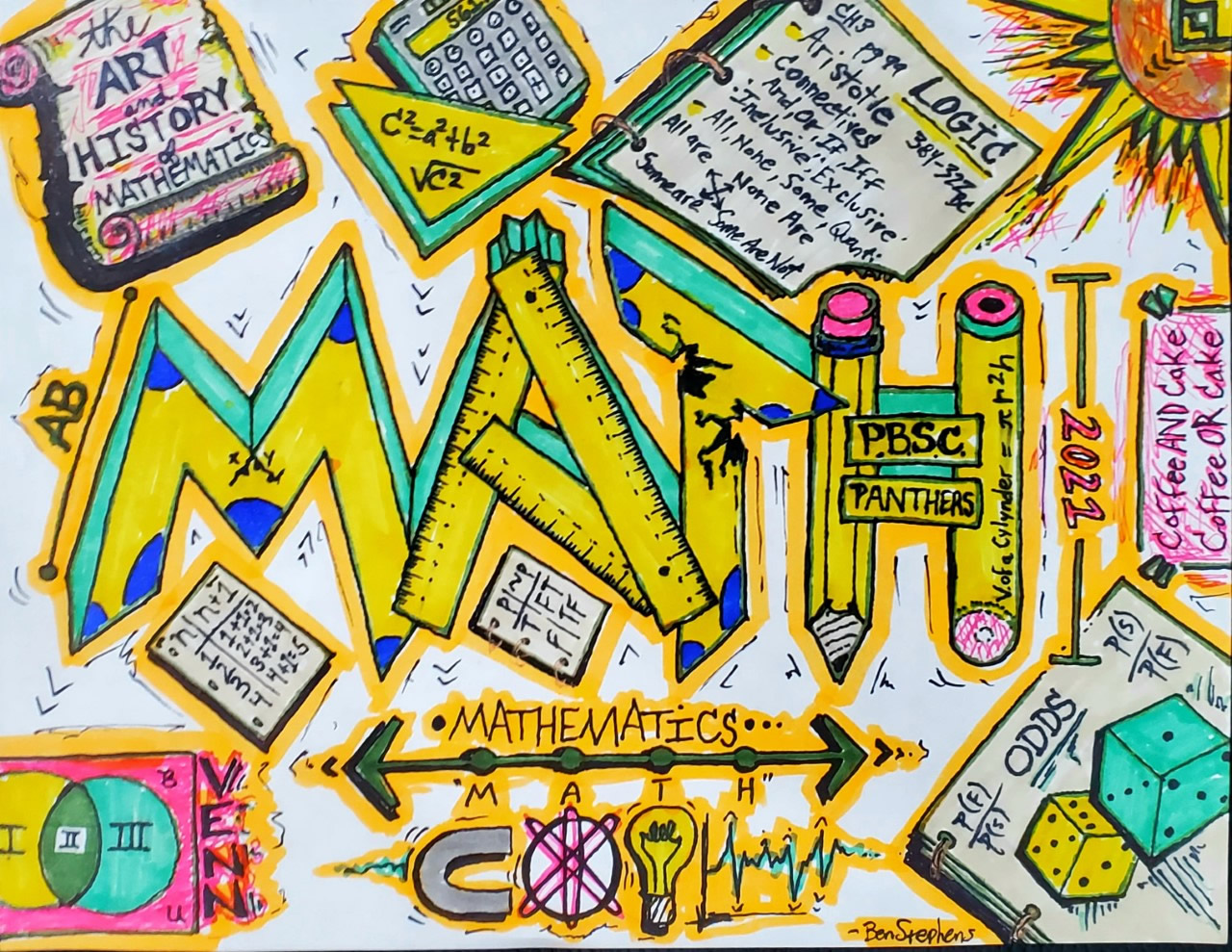 "Hello, I used graffiti to represent some Math related ideas I have learned thus far at PBSC. I have done graffiti for awhile, local to West Palm Beach. After making a decision to change careers, I found myself learning again. It is a great feeling. I am happy to submit this 100% all original, hand drawn picture for PBSC's Math Week art entry. I used pencil, marker, metallic marker, colored pencil, on cardstock. Thank you." -Ben Stephens 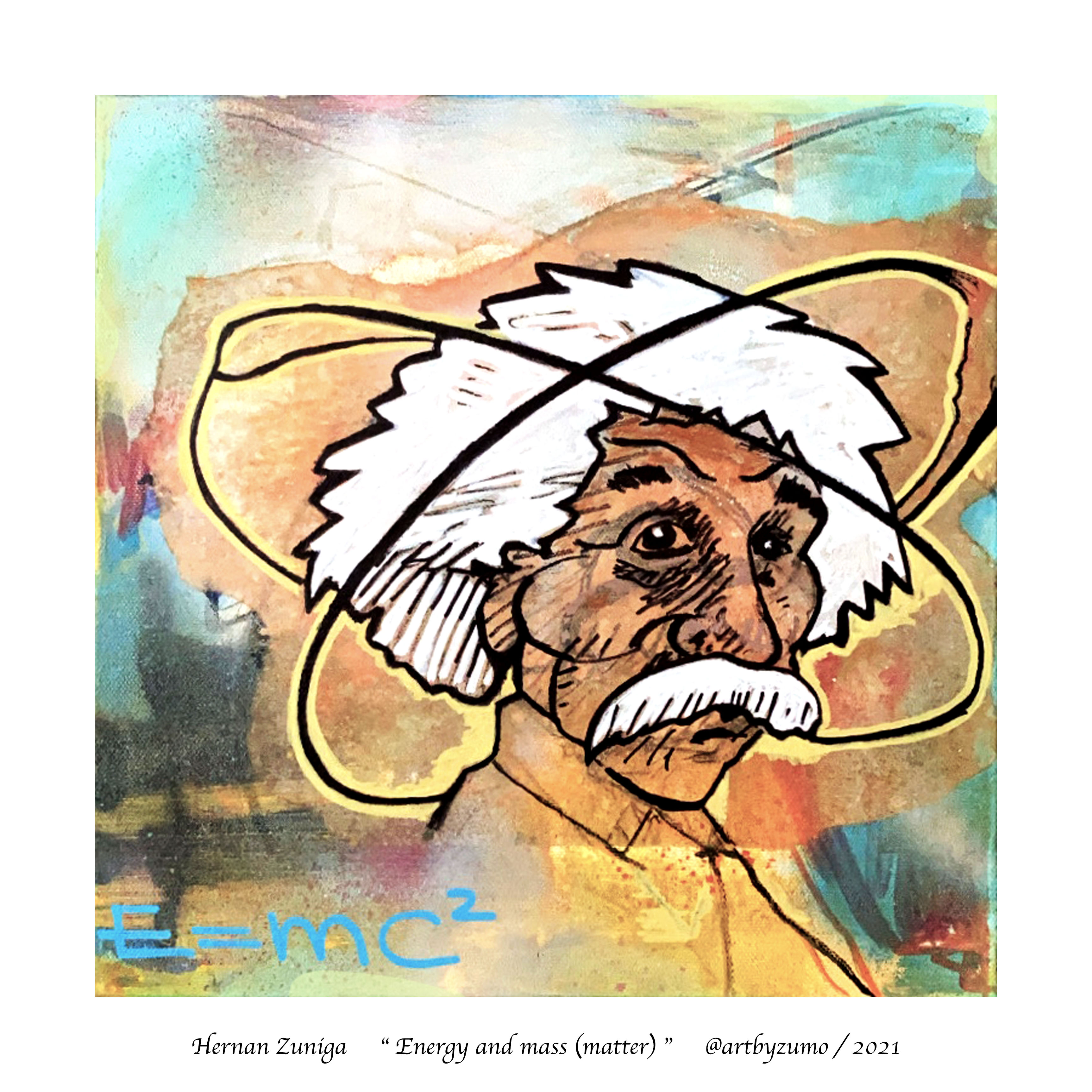 "In this image I am honoring a famous scientist that left us a testimony of passion and commitment in the Art and History of Mathematics. Many times walking into my Math Lab sessions in the wall there is a photo of Albert Einstein that calls my attention in many aspects. Doing research and homework about equations with my tutor I learned about Energy and mass and I realize that the image or picture i was staring at, was connected to the time I was spending at the Lab. This is how this mixed media art work came to life." - Hernan Zuniga 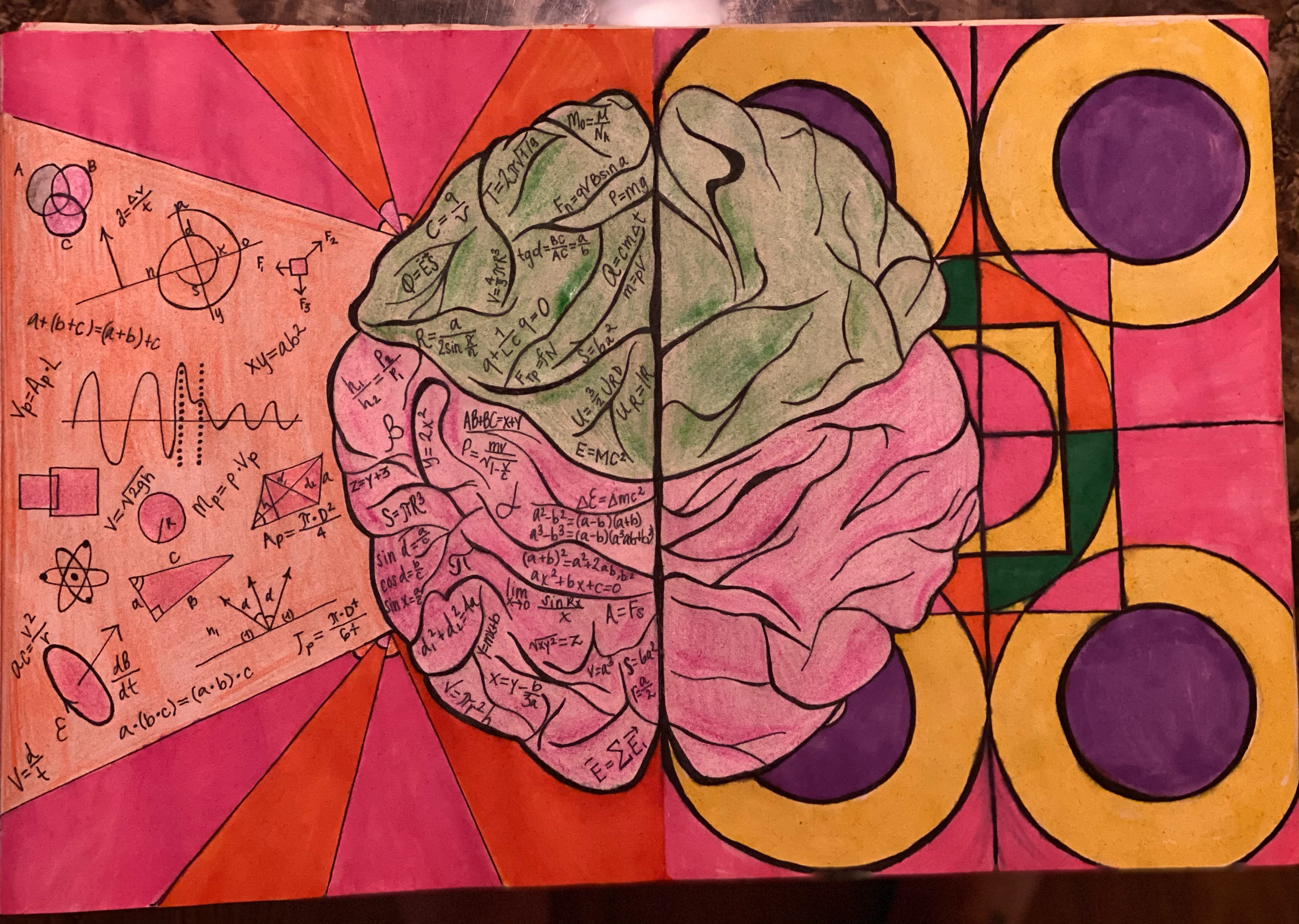 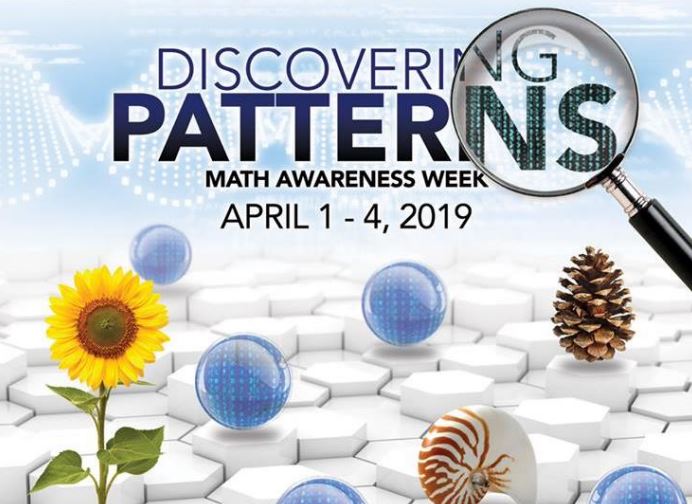 Schedule of Events: Lake Worth campus